Friends, I cannot tell you how much I was looking forward to this weekend. 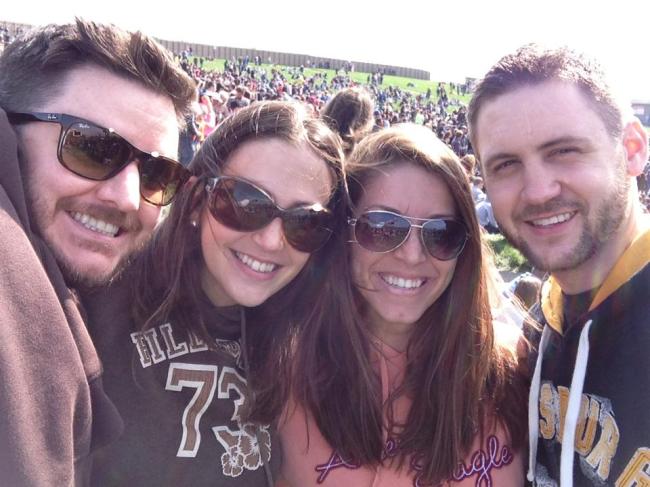 My good friend Lauren and her boyfriend David invited Darrell and me to come up for the day-long concert, and when I saw the lineup of course I was in: Buckcherry, Bush and Soundgarden – it was like a time travel back to high school! (And you better believe those tunes sounded pretty sweet coming out of my Geo Storm back then.)

Don’t let the sunny photo fool you, I think we encountered every type of weather that you can in May – cold, warm, rainy, cloudy, sunny – but it was absolutely worth it.

While I was definitely looking forward mostly to the headliners, I really loved New Politics, a band out of Copenhagen that opened up the show. They were super high energy, sounded great and were an awesome way to shake off the cool weather and gear up for a great concert. I’ll be plugging in the headphones today to hear more, for sure.

Buckcherry came on second (which was a bummer – I would have loved for them to have a bit longer of a set) and they sounded fantastic. Darrell even commented they sounded better than he would have thought, and coming from someone who isn’t a huge rock fan, I’d say that’s a compliment.

AWOLNATION, a band I wasn’t super familiar with going in, put on a good show. It was probably a little more hard rock than I typically listen to, but I recognized “Sail” and really enjoyed the whole set.

Bush was up next, and sounded fantastic as expected. Unfortunately, the Indiana crazies showed their colors when Gavin Rossdale decided to run out onto the lawn. He was swarmed in minutes and made the whole thing very uncomfortable!

Luckily, after a few shouts telling people to get back, he was safely back on stage and performing like nothing had happened. Making an assumption here because I couldn’t really see much, but come on ladies, get it together.

By the time Soundgarden made it to the stage, it was getting late and really starting to cool off. Once we heard Pretty Noose and Black Hole Sun, we all agreed to call it a night.

The weekend seriously rekindled my love for summer concerts, making me realize I need to put a few more on the books for this year.

What are some of your favorite bands to see live? What concerts are you most looking forward to this summer?