I’ve been trying to write this post for  more than two weeks. Story of a new mom’s life, I guess.

I mean, I had a whole, 28-days later “mombie” theme all planned out when I started writing this at the 4 week mark. It was pretty sweet, as you can imagine. But since little dude is now more than 6 weeks old, it loses its luster a bit.

Seriously. See those strikethroughs? This is taking forever to finish.

So here I am, finally getting a chance to tell you all about the crazy little whirlwind that started November 22, 2015.

The short version: Franklin Marcus Manet was born at 11:28 a.m., kicking and screaming and perfectly healthy.

And so, I’ve spent the better part of the last  two months solidly on the couch, under the influence of a heady cocktail of baby snuggles and spit up, topped with a dose of sleep deprivation for good measure.

I’ve lost all concept of time. Honestly, the only real reason I know it’s been that long is because Christmas already happened, and by nature of the fact that he arrived before Thanksgiving, that puts us at over a month. The days – OK, weeks – have flown by, and here I am, about to start 2016 as a mom.

But let’s back up a bit. I’m going to commit little dude’s birth story to the internet, so if you don’t want to read about how he arrived, skip to the bottom.

Now, for the long version…

I woke up in the middle of the night on November 22. Not entirely unusual for someone who’s 9.5 months pregnant, but things got real pretty quickly.

2:30 a.m.: Wake up to pee (shocker, right?) and notice what feels like gas pains – oh, the many joys of pregnancy – until I realized they were coming and going in waves, about every 2-3 minutes.

3:00 a.m.: Wake up Darrell and tell him I think something might be happening. He’s confused as to how I don’t know for sure. I tell him to get a shower just in case.

6:30 a.m.: Contractions still aren’t that painful, but since they’re still coming around every 2 minutes or so, we decide to head to the hospital. Pack the bags, load the car and we’re off.

7:30 a.m.: We’ve arrived at the hospital and checked into Labor and Delivery Triage. The nurse gets me hooked up to the monitors and while we can see some contractions, they’re minor at this point. She checks and I’m only 80% effaced and 1-2 cm dilated.

She said she’d come back and check again in about an hour, so we hung out in the triage room. Contractions were picking up in intensity but were still pretty tolerable, so I was afraid I wasn’t progressing and we’d get sent home.

8:30 a.m.: Nurse comes back to check and I’ve progressed to a 2, 2.5 cm and fully effaced. She said it was definitely real labor but that being a first time mom, it could take a while. She encouraged me to walk the halls and see if we couldn’t get things moving a bit.

9:30 a.m.: After an hour doing laps (and getting more painful contractions) we go back to the nurse and she checks me again. 3 cm. At this point she asks if I’m wanting an epidural and I tell her I’d like to go natural if possible. She was excited for me to do it and said that getting from 2 to 5 cm was the worst part … once I got to 5, she’d expect me to go a centimeter an hour.

We start walking again, this time needing to pause and really work through each contraction. A random physician walked by me when I was doubled over in the hall and asked if I was OK.

Dude, you’re in the labor and delivery wing. What do you think I’m doing here? Carry on.

10:20 a.m.: These contractions have GOT to be moving things along, so we go back to the nurse to check again. She says I’m 4, 4.5 cm and it’s time to check into labor and delivery.

Waiting for them to set up the room was torture, and I was starting to seriously reconsider getting that epidural. She’d said a cm/hour after 5, right? I can’t take 5 more hours of this! I started asking questions – when would I have to decide, what would I need to do, etc. if I wanted the epidural. They said they’d have to call in the on-call OB if I wanted it because she’d have to approve it first, and that they’d only call her if I said I did.

I told them I’d check for progress one more time, and decide. Mentally I’m prepared to hear things stalled and I’m still a 5, and if so, I’m getting all the drugs.

11:00-ish: I finally get into the bed, get hooked up to the monitors and they check again. 7 cm with bulging waters.

Scratch that. Water breaks. Time to call in the OB … and no time for the epidural.

The doctor arrives and checks again – I’m 9.5. She tells me to let her know when I feel the urge to push.

Um. Right now. Pretty sure I was actually already pushing, but yeah.

The contractions were pretty much right on top of each other and I could barely breathe. In fact, I apparently turned blue and needed oxygen, but they coached me through and a few minutes later…

Life has been a complete blur around here, but I suppose that’s life as a new mom. My ability to publish a blog in any reasonable amount of time is hiding somewhere, probably along with my ability to finish a hot cup of coffee or to put on anything other than pajamas when I get dressed in the morning.

Of course it’s worth it, to see the little guy we’ve brought into the world growing like crazy. We waited so long and went through so much in the process, sometimes it’s hard to believe he’s actually here.

But I’m not going to pretend like it’s all sunshine and rainbows. The truth is becoming a mom is by far the hardest thing I’ve ever done. Nothing could have prepared me for the emotional and physical struggles I’ve gone through over the past few weeks.

Physically, I recovered from the delivery pretty easily, with the exception of feeling nauseated for the first 2-3 weeks post partum. I’d never heard of post-partum nausea (until I Googled it, of course), but apparently it’s a thing and it felt like I was back in the first trimester all over again, but worse. I am so incredibly happy that part is over.

Emotionally, it’s been a roller coaster. Blame the hormones or the sleep deprivation (or more likely, both), but the first 3 weeks had me oscillating between confident new mom and anxiety-ridden mess, many times a day, every single day. Everyone talks about how hard it is, but there was really no way to prepare for how very seriously hard it is.

It’s like your first day at a new job, doing something you’ve never done before, and getting no feedback whatsoever that you’re doing it right. With your mind telling you you’re doing everything wrong.

Every day. And every night.

And your only coworker has no idea what they’re doing either.

I still have my moments, but for the most part, the anxiety has been replaced by an incredible amount of love toward this little guy who depends on us so much.

I’m still stressed and over tired, sure, but I look at his face and know we’re falling into a new normal. I’m gaining confidence every day and he’s growing more and more into a person with a personality, giving actual feedback as best he can.

I mean, he SMILES. Actually smiles at us now.

And it might just be the greatest thing I’ve ever seen.

Welcome to the world, Franklin. I can’t wait to see the mark you leave on it. 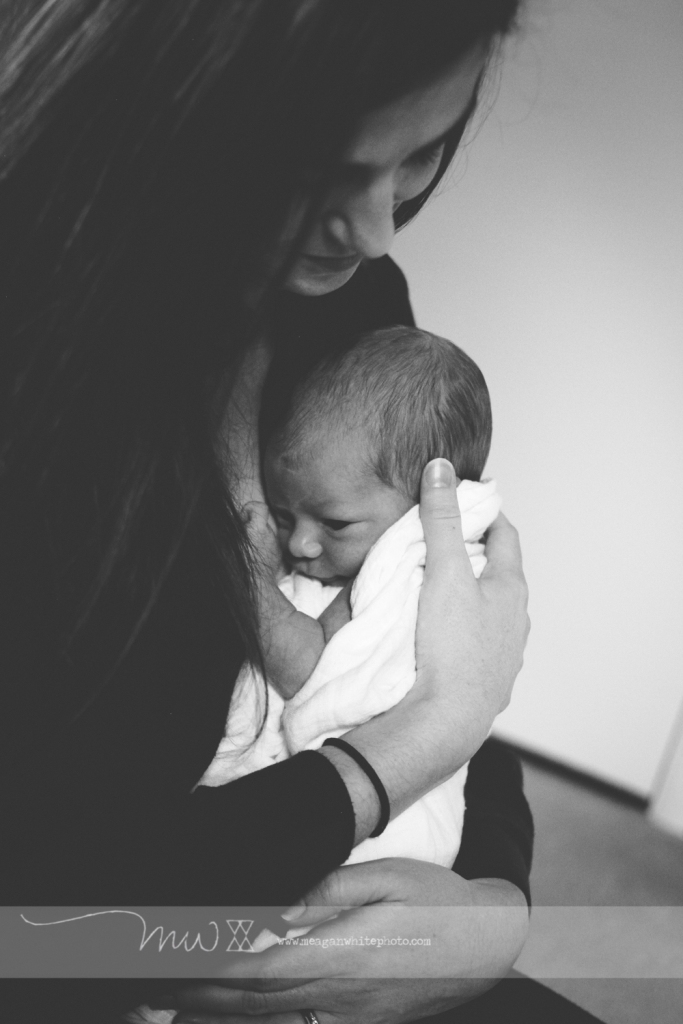 Photo courtesy of Meagan White Photo. She rocks. Check her out and see more of Franklin’s newborn shoot here.