Remember that time I thought it was crazy that I hadn’t written up Franklin’s birth story yet, and he was 6 weeks old?

Flash forward 3 years and here we are, almost 4 months after Roger’s arrival and I’m just sitting down to write about it. If that doesn’t sum up life with two small children, I’m not sure what does.

As a second child myself, I hate this; I hate the idea he might grow up believing he’s second-rate and not simply second-born. That he’ll look through posts and notes and photos and wonder why there are more of Franklin (though let’s be honest, my storage limit keeps informing me that there are plenty of photos and videos of both of them). And while I take some solace in knowing that Franklin’s baby books are lying mostly empty and unfinished on our bedroom floor (and therefore the fact that I haven’t even bought one for Roger yet is really nbd), I hope with time I can find a more manageable way to show up for both of these boys equally.

So today, Roger, 3 days shy of your 4-month birthday, you get your arrival story. Thank goodness I wrote it down in my phone at 4:40 a.m. the morning after you arrived.

3:15 am – Woke up to contractions about 5 minutes apart. Not strong but steady.

3:45 – Woke up Darrell, started to call family to show up to be home for Franklin in case we needed to leave quickly.

4:15ish – Kim shows up. Contractions are still relatively mild but since Franklin came so quickly, we wanted to be at the hospital in plenty of time. Doctor on call confirmed we should go ahead and come in, given that history.

Arrive at hospital, labor in triage but things never really progress. Sent home with a “come back when things get more serious.” Le sigh.

Went home and since everyone was already at our house, decided to go ahead and go out for breakfast with the families. Hung out at home for a while, having irregular, mild contractions. Mom and I went for a walk, Darrell went out and got me an exercise ball, and around 11:30 or so I decided to lay down for a nap.

12:30 – Woken up by a relatively strong contraction. Laid there for half an hour and they got closer together and definitely stronger. Labored at home until they were close to 3-4 minutes apart.

3:16 pm – Arrived back at the hospital. Hooked up to triage monitors and everything slowed down. Contractions were about 6-7 minutes apart but still pretty strong, yet an hour or so of them made no progress.  Doctor suggested we go home; we suggested we walk a bit and see what happens.

5:03 – We start walking the halls. Contractions immediately pick up in frequency.

6:00 – Check again and I’ve made the tiniest amount of progress; now a 2. Doctor and nurse believe it’s not happening today and tell me to labor at home. I said if they’re this strong and 2 minutes apart, how will I know when it’s time to come in? It feels like it’s time to be here now. Want to try walking for 1 more hour. They basically tell me I can do what I want since I’m a day overdue, but it’s clear they believe it’s pointless.

7:00 – Doctor sees me working through a contraction in the hall and says let’s do a check. Tells me I’m a “good 4” and it’s time to admit.

Get checked into L&D and contractions are coming hard. Check again, 5. Check about 15 minutes later, 6, and the doctor breaks my water.

Contractions get really intense and I’m feeling the need to push but I’m still not fully dilated yet. I’d been using a Cub seat to labor on but had switched to my back for checks; nurse suggested flipping over once more to see if that does the trick. It does. Baby is coming.

Flip back over to push. Push through one contraction – there’s his head! But the cord is wrapped around once. Doctor tells me to wait, clears the cord, then baby comes out in 2 more pushes. Beautiful (purple) baby boy and after a few rubs and good suctioning he’s screaming and being placed on my chest.

The past few months have been a whirlwind but I’m also shocked at how seamlessly Roger has fit into our lives. Though I suffered through what I now can look back on as likely PPA after Franklin was born, I’ve felt (almost) nothing but joy this time around – a sense of completeness in our family.

Of course, nothing is easy. Franklin had a hard time adjusting to life with a sibling and took a solid 6-weeks before he showed any interest in interacting with Roger. Alone time went from limited to non-existent, and it can be hard to stay sane when you’re needed 24 hours a day.

But I’m so in love with these two boys, who are already two such entirely different humans, both in how they look (Franklin is Darrell’s mini-me, but Roger is really starting to look like a Covington!) and their general demeanor. Where Franklin has always been high energy (and low sleep), Roger has been relaxed and (until the last week when daycare sickness reared its ugly head) a blessedly good sleeper.

Really, really, REALLY hoping that one gets back to normal soon.

But Roger James, sleep or no sleep, you’re more perfect than we ever could have imagined. How on earth we got this lucky twice, I’ll never know. 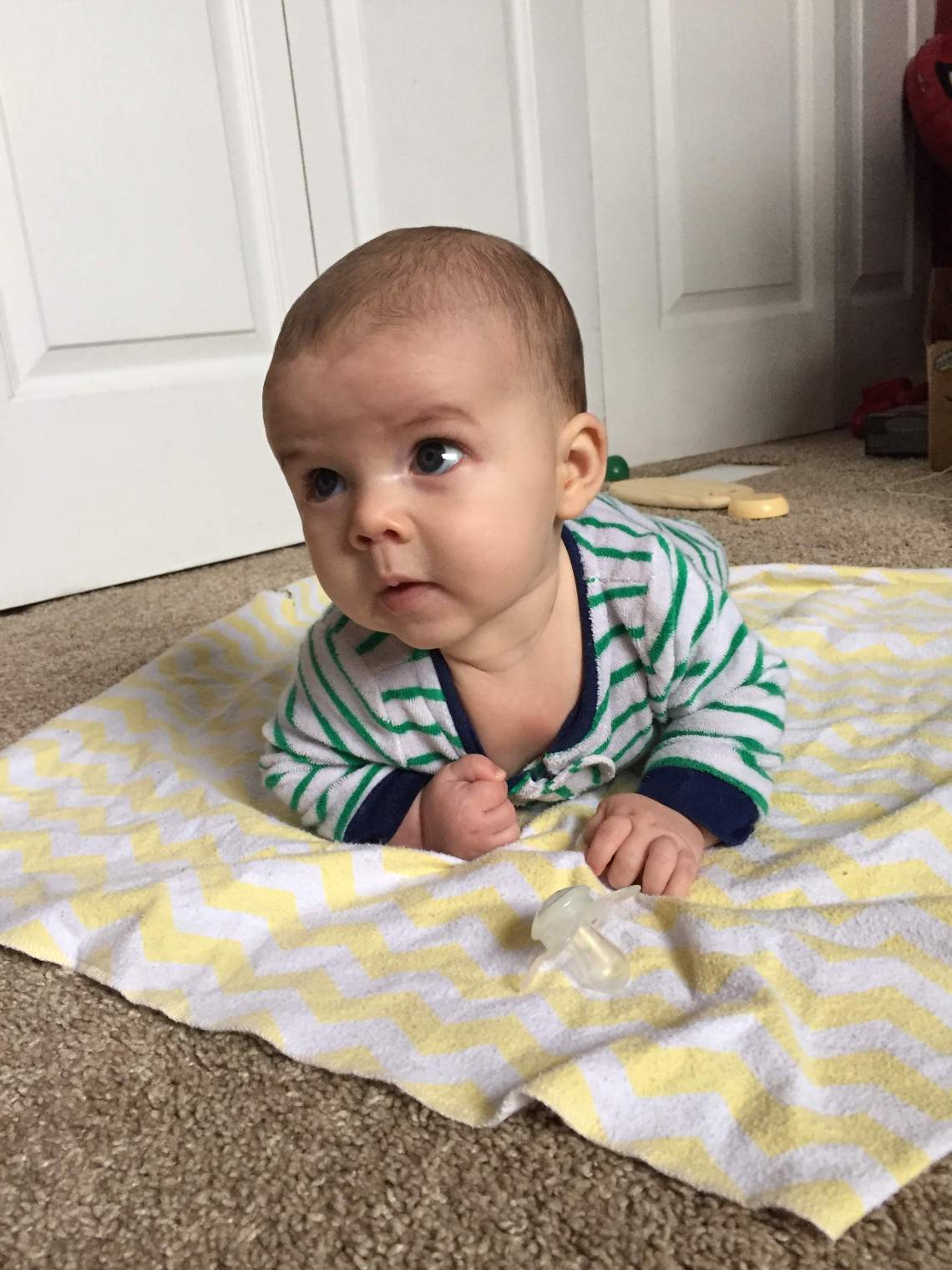